When I'm asked why I run, I often start with answering the unasked question, why did I start running? Because why I run today, is a very different answer as to why I started to run.

Science may have proven that exercise is good for mental health, I now understand that answer on a personal level. I'm a happier and calmer person when I run regularly. There have been evenings my husband has shooed me out the door to go running just because I was too cranky or frazzled.

Running for me is a challenge. I was never a distance runner. When I played sports I was goalie. No one cared how slow the goalie ran a mile. The sense of accomplishment when I finish a race, especially when I set a personal record, or a personal best time, is immense. 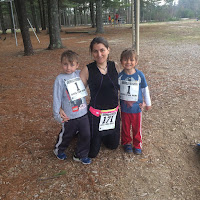 I run to be a good example to my children. Children learn from watching, and "do as I say not as I do", never works. If I want my children to have good exercise habits in life I need to demonstrate good exercises habits for them to copy. Just like eating vegetables, they are always on our table at dinnertime, and we all seem to fight over the last stalk of broccoli. My children see me sticking to my training plan even when I'd rather stay inside to drink tea. They were there when I came in last(19th place) at the small 10k. They saw everyone cheer me on, and how I handled being last. What better way to teach them about losing, then for them to see me lose.

"Mom remember that time when you came in last?"


I run to be congruent with my care. I'm a chiropractor and I encourage my patients to be more active. How can I ask someone to be active 2-3 times a week, if I can't find the time to do it?


Friendships! I have made so many new friends running, seriously. I have never met a better group of athletes that encourage each other.  Let's be honest running is a participation sport. Most of the time, you sign up, you show up and when you finish a race, you get a medal. You get that medal with 15 minute miles and 6 minute miles. My friends that easily run 8 minute miles will see me after a race and say "Great Job". When I had to do my first 8 mile run ever, a friend of a friend who is now a friend(did you follow that), met me at local trails and ran with me, even though I am much slower than she is.

As to why I started? I'll focus on the most recent start that stuck. Afterwards, I'll detail the various attempts at starting.

In 2013 we lived in a townhouse close to school. A fellow classmate and friend of mine lived nearby and had started running. The changes in his health were amazing. At the time I was tandem nursing my sons. Weight was not a concern for me, and by this point I had figured out how to eat enough food to nurse the boys, and have enough calories to walk across a room. I did not want to wean the boys until they were ready but I needed some time with out being touched, without hearing Mom, Mom, MOM! I needed that time to not be while I was sitting in a classroom lecture, working with patients, or taking an exam. 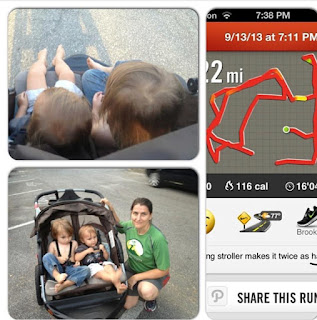 I started with Couch to 5k and walked more than I ran at first. I started using the nikeplus app so I could see the progress of my classmate for inspiration. I considered signing up for a race, but with a grad school budget, I wasn't able to afford the sign up fee for a race for months. The charity that benefited from the race had helped out one of my sorority sisters. I also refused to buy any fancy running clothing. I did get a good pair of sneakers, because that was a safety and health concern. Otherwise I ran in what I had available. Hand me down yoga pants, my husbands workout shorts, t-shirts(some of them wicking), maternity tank tops. I wanted to make sure this time I stuck with running, before investing any money in it.


A friend in the Marines always posted her amazing running pictures with her wearing Skirt Sports. I admired the look and while I'm generally not a skirt girl. I wanted running skirts. I hunted clearance racks and eventually purchased a few ill fitting but cute running skirts. I honestly had no idea until I wore my first Skirt Sports skirt just how different the quality is.

Expect a serious clothing upgrade over this year as I start getting running clothing that fits me and is functional.


Previous attempts to start running and why?

After a bit of a health crisis, I decided to start running. A co-worker ran often, though I suspect to justify his beer consumption and he helped guide me through the beginning steps. He took me to a local running store to get fitted for the right sneakers and gave me a copy of The Beginning Runner's Handbook.

At the time I was working alongside the Charles River in Cambridge and had amazing views. After work I'd run there or take advantage of the heath club at the local hotel work had arranged for us.

I was inconsistent, but even with that I ended up running Salve Regina 5k with a friend who I got to know better the night before.

I made a few attempts to start running when we lived in Dallas, GA. I joked that it was like trying to quit smoking. I'd be good for a week, maybe two and then something would happen. My schedule would get hard to juggle, I'd really not want to wake up early, The excuses were plenty. So I'd skip the run "just today" and plan to be back at it the next day. Then after a week or two of saying "tomorrow i start" I'd just admit I wasn't and stop trying. Until I was inspired to re-start all over again.  I would also drag my husband out to run with me for all these attempts. That did not work in my favor, as we now had 2 people to come up with excuses for "not today, try tomorrow". Discovering I could track my running stats on Runkeeper was almost a game changer. I started using the app in March 2011 and was doing pretty good for a few weeks until I started getting winded and exhausted. I blamed it on a cold I just couldn't shake and went to see my doctor. Surprise! I was pregnant with my second son.

I didn't start running again until 2013.
Posted by InnatelyJohanna at 4:28 PM