This post contains affiliate links. I make a commission for purchases made through those links in this post. These types of links are indicated by an *.

Sleepy Hollow Mountain Race in Huntington, VT
April 20, 2019
This race is part of the USATF Mountain Series, I ran as a Gate City Strider.

This was my first trail race and my first mountain race. April is Mud season in Vermont and many of the side roads were flooded, or so it seemed. I wonder if Vermont paves any road that is not a main route or highway.

My husband Alex and I drove up to Vermont and stayed in a condo the night before about 45 minutes from the race. The drive up got interesting when it started to rain. We arrived about an hour after we planned.
The morning of the race, the skies were overcast without rain. The drive to the mountain was pleasant and we even drove by the place we got married nearly 12 years ago.  On Friday, I discovered there was a risk of thunderstorms. I don’t mind rain, but thunderstorms terrify me, the idea of running alone in the trails with that going on is something I hope to never experience.

I knew the weather had the potential to be bad, and that there would be MUD.  At the start of the race they brought up the storms again and said that safety came first. I decided if the thunderstorms started before I set out on my third loop I was done. Luckily they did not.
Just before the race was to begin, the skies opened up and the rain started again. Thecourse is 3 ascents and 3 descents, with the last one starting after you cross past the finish area.

The first 20 mins of the race were horrible. Adjusting to power hiking(I wasn’t running) up a steep muddy hill where I had to focus on every step to avoid having my foot sucked into mud or slipping, along with the transition from dry feet to wet feet. Once they were wet all was good, but when my right foot was soaked and my left foot only damp in some areas, I can only focus on that. I watched the rest of the runners disappear into the mountain. There was a man behind me that was coughing and I think he threw up, but I wasn't looking back to see. He eventually passed me and I didn't see him on the trails again, which with the trees and turns he could have been close and I wouldn't have known. By the top of the first ascent I was fairly alone in my run. I could see one person in front of me.
The first decent was a new experience, I swear I made it down without falling by pulling in so many skills from my past. Ice hockey to control a slide, larping to make rapid changes to where my feet land as the ground could be mud, deep mud, leaves with light mud or rocks. As it bottomed out there was a water stop and some smiling people. I ate a Clif Blok,  chatted and continued on. I may even have run a bit as it was flatish.

Along I went until the next ascent, which was no where near as bad as the first or so I thought. At a turn, I saw the Darth Vader signs(on left and right) and thought really that wasn’t bad what were they talking about. That was a mistake I was about to turn right onto Darth Vader and quickly my misjudgment was corrected as I tackled switch backs. Now I had read about the challenge of switch backs in Mirna's book*, but I honestly had never experienced them. Switch backs musts be experienced to understood.  As I climbed I came to a small bridge and found the sith, took a picture and then carefully started around bridges and continued on the steep switchbacks(why did I sign up for this again?) trail. At the top, a man joked i was still in first place for ribbons. Along the way I saw Princess Leia, but my phone was misbehaving due to the rain, and that my hands were wet. 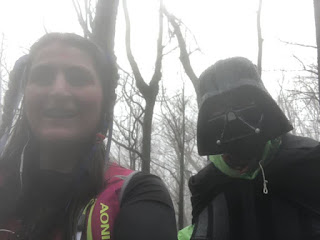 I don’t remember too much from that decent. Just that I was getting close to the start area when I needed to decide to continue or quit. Sky looked good so I continued. Seeing people also helped encourage me along. One of the women at the water stop made a joke that not a hair was out of place on my head. As I started the final ascent I was passing runners who were done and heading to the finish. My watch was 1/4-1/2 mile off so I couldn’t trust it for how much further but when I saw the 5 mile marker I was so happy. 1.5 miles to go I can do 1.5 miles. I was starting to feel the cold at this point, getting zings in my hand and arm. The puddles were cold on my feet, rather than nothing. The Han Solo trail had the best views but my phone was still not behaving. I did stop on a boulder and just look out and appreciate all I could see. On the descent I saw the 6 mile marker and knew I was almost done. Then the 75 meters to finish sign at the bottom of a short hill, as I got to the too one last burst or running and I was done and starting to notice how cold I was.
Alex was waiting under the pavilion for me. I was glad he was there to take care of me. I didn't realize how cold I was. I had planned on 60's and raining, which I can handle, and had joked if it was 40's and raining I might be in trouble. I was wet all the way through and in trouble. My food allergies made hitting the burrito bar off limits. After washing my lower legs and sneakers off we entered the lodge. I wish I had taken a picture of how muddy I was. It was rather impressive even if the puddles on the course kept washing it off. Thankfully another runner posted their shoes to instagram. Once in the lodge we realized we failed to bring a post race outfit. I stripped off my wet shirts and used my dry run jacket as a shirt. Drank my Tailwind Rebuild* and then we headed to the car so I could strip off my sneakers and leggings. By random chance my ugly black sweatpants that I thought I'd thrown out were in there so I could strip out of my Gym Girl Ultra skirt that was soaked through as well. Now we know for next year what to pack.

Once we got back to the condo, Alex made the most amazing spread of smoked salmon, cucumbers, fresh salsa, rice cakes and potato chips. I want to do this race again, but next year I'll do better training and spend more time on the stair master.

Next Race is Pack Monadnock.


Posted by InnatelyJohanna at 8:42 PM